New Norwegian accumulator hybrid ferry MS VISION OF THE FJORDS has been described by its owner and its builder as “world leading” and “probably the greenest sightseeing experience ever created”. The ferry was designed and built by shipbuilder Brødrene Aa, located in Hyen on the west coast of Norway. Its hybrid solution allows it to run on diesel engines up to the entrance of the protected UNESCO Nærøyfjord, where it then switches to silent running, emission free electric power. In addition, the vessel features a special hull (of type catamaran), made of carbon fiber, designed to minimise wake and thus reduce impact erosion on the area’s vulnerable shoreline. The energy storage system will be recharged from shore at each stop. The sleek design of the boat was inspired by the famous “Trollstigen”, a mountain road winding its way up a hillside next to the area where the boat operates.

The Fjords – a new ferry operation which is co-owned by transport operator Fjord1 and Flåm AS, which promotes tourism opportunities in the Flåm area, to the north east of Bergen – owns the passenger ferry, which was delivered by shipyard Brødrene Aa in June. The Fjords was established in January 2015 and became fully operational in May. It is based on the total leisure and tourism traffic in the Norwegian fjords from Fjord1 and Flåm AS. It has eight vessels in addition to VISION OF THE FJORDS, leased from Fjord1 and other operators.
The 40m in length and 15m wide vessel, is of type catamaran and features two propellers. The ferry has a capacity for 400 passengers and is travelling between Flåm and Gudvangen, which is approximately 20 nautical miles. It operates for half the trip at a speed of 20 knots using the main engines. For the other half of the trip it travels at 8-10 knots using the electricity only. The energy storage system will be charged from shore at each end stop, and can also be recharged by the diesel engines when they are operating, if necessary.

MANCRAFT AS engineers complete propulsion systems for high speed vessels in the conventional market. The new hybrid propulsion drivetrain is engineered by MANCRAFT AS and Brodrene Aa and is tested and approved in cooperation with DNV GL according to the claims of “High Speed, Light Craft and Naval Surface Craft (2014-17)”.
Each propulsion drivetrain has been engineered as a parallel hybrid solution where both the electric engine and the MAN diesel engine, separately or together, can drive the propeller. The two MAN diesel of type D2862LE422, supplying 749 kW at 2.100/min each, are Common Rail engines and are operated in the rpm speed range where the fuel consumption and emissions are at their lowest / kWh. The engines are connected to CENTA CP clutches and transfer their power through ZF marine gearboxes to the two variable-pitch propellers.
For electric propulsion, the vessel relies on a pair of 150 kW Oswald permanent magnet electric motors. The electric motors are water cooled and very silent. They operate as a propulsion engine or as a generator depending on the operating mode.
The hybrid system is 100% flexible regarding available electrical infrastructure on shore. The new hybrid system is modular scalable and can be used for all types of propulsion systems (eg. propeller, waterjet, etc.).The system has advanced monitoring. 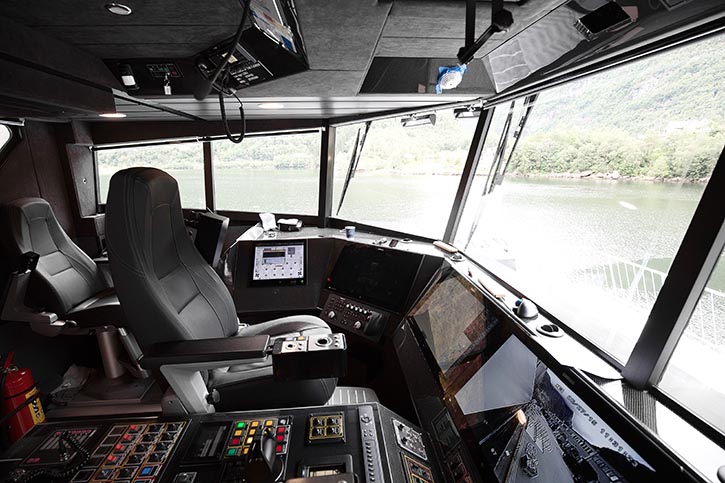 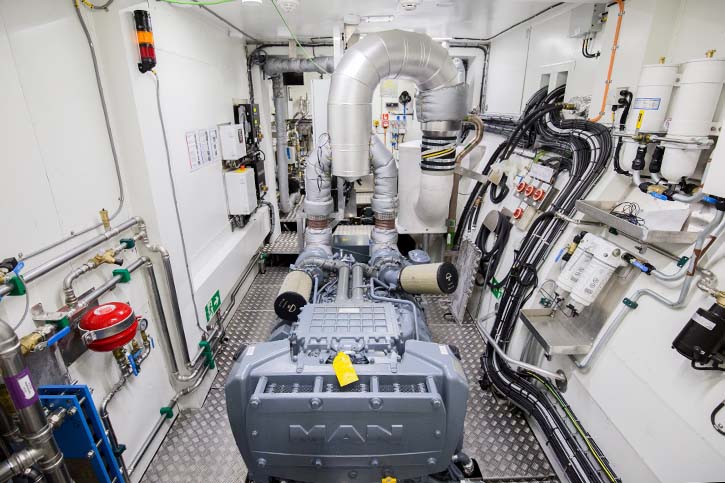 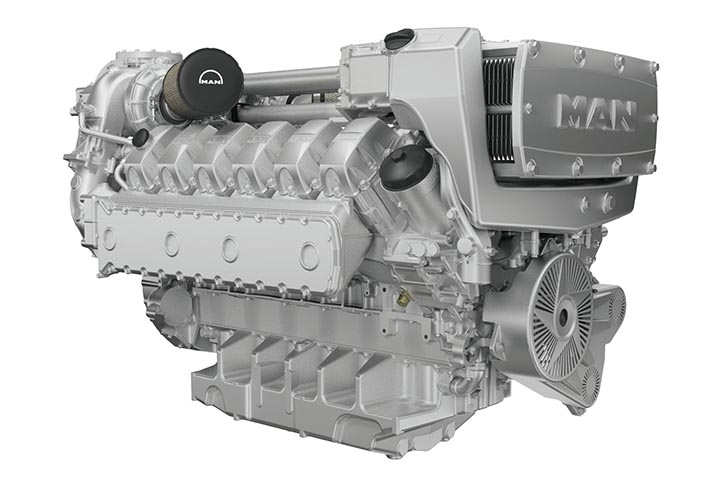 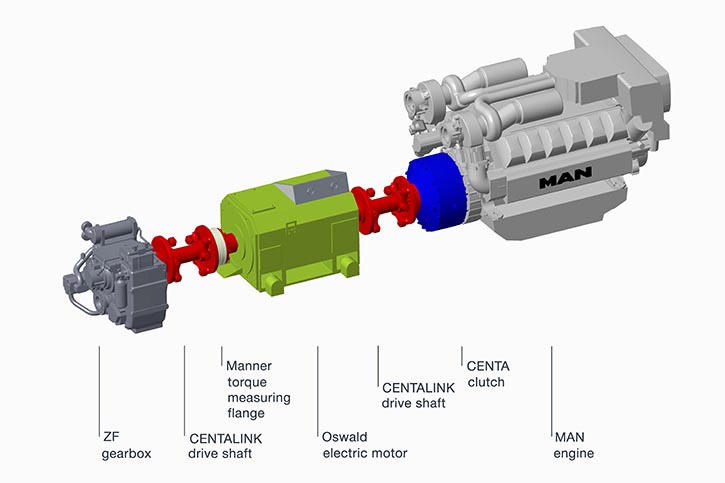 The energy storage system uses Li Ion MNC cells and modules from LG Chem adapted for maritime use by Zem, has a total capacity of 576 kWh-825V DC (2 x 288 kWh), which are placed in the two catamaran hulls. Arild Austrheim, Fjord1 head of projects and newbuilding, said: “The electricity on shore is 100 per cent from hydropower and produced locally. A manual plug is used to connect the vessel to the grid. It charges for 20 minutes and is easy and fast to connect. There is a lot of hydroelectric power available in the area where we are travelling. The region is one of the largest producers of hydroelectric power in Norway and it is only using 10 per cent of it. This means that 90 per cent of this power is being exported without benefit to the community.”
MS VISION OF THE FJORDS uses a lightweight version of ABB’s Onboard DC Grid, the power distribution system which manages and controls the power between its diesel engine, propeller and charging station. The onboard DC allows the generators to run at variable speeds, making the engines much more efficient and leading to fuel savings. The system can disconnect the engines using the same electric generator for electric propulsion, or if needed disconnect and charge the diesel engines direct to the accumulators even if no power is being put onto the propulsion system. The accumulators are split into two sections, with one on each side of the vessel.
ABB onboard DC Grid will transfer energy to the ZEM battery during charging while the vessel moves at around 20 km/hour to the sights while the diesel engines are running, at both ends of the voyage. Once the ferry has arrived in the most scenic part of the fjord, it will switch to full battery power, operating in almost complete silence at around 10 knots (approximately 18km/h).

According to Brodrene Aa’s own information is a specialist in using this carbon fibre material and describes its benefits. Its low weight but high strength lead to reduced fuel costs, reduced CO2 and NOx emissions and reduced maintenance costs. Norwegian ferry operators recognise the benefits and the material has already started to dominate the Norwegian fast ferry market. MS VISION OF THE FJORDS is an exception to this, as it is not a fast ferry.