Considering the wide range of both sources of fuel and sources of ignition within the engine room, it should come as little surprise that a large proportion of fires onboard ships originate there. Engine room fires are one of the most common fires on ships owing to the presence of a wide range of sources of fuel, sources of ignition and running machinery. An extended period of time onboard a ship without a fire incident can lead to complacency and a failure to prioritise fire prevention measures and simulated fire incident practices.

The UK P&I Club has teamed up with experts in forensic investigation, Burgoynes, to produce the latest Risk Focus on Engine Room Fires. Engine room fires are one of the most common fires on ships owing to the presence of a wide range of sources of fuel, sources of ignition and running machinery. An extended period of time on board a ship without a fire incident can lead to complacency and a failure to prioritise fire prevention measures and simulated fire incident practices.

Research coordinated by IMO has indicated that between 30 and 50% of all fires on merchant ships originate in the engine room and 70% of those fires are caused by oil leaks from pressurised systems. Following a major engine room fire it is relatively rare that a ship is able to proceed under her own power. This leads to expensive costs of salvage, towage, repairs, downtime, cancellation of cruises, etc, which can typically run into millions of dollars.

Special attention should be given towards maintaining a clean and tidy engine room where machinery and emergency control equipment are installed and operated in accordance with SOLAS Regulations and IMO Guidelines and that the equipment is routinely serviced and maintained in good working order, and subject to routine testing. IMO MSC.1/Circ. 1321 dated 11 June 2009 entitled “Guidelines for measures to prevent fires in engine rooms and cargo pump-rooms” is especially relevant. If a failure to carry out proper maintenance or to have proper maintenance systems in place is linked to the cause of a fire, the shipowners or managers could face litigation in which allegations of crew negligence and/or unseaworthiness feature.

All seamen should be aware of the Fire Triangle principle in that if the three elements of an oxidiser, (invariably oxygen from air), a source of fuel and a viable source of ignition come together a fire will result. The basic principles of fire fighting are to “break” one or more sides of the Fire Triangle so as to limit or eliminate the source of fuel and/or the oxidiser. It is also important to keep the fire triangle in mind when conducting fire risk assessments and implementing fire prevention measures. 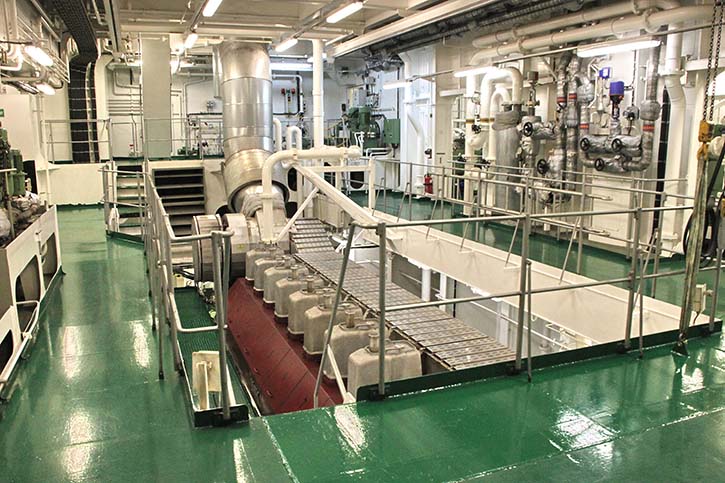 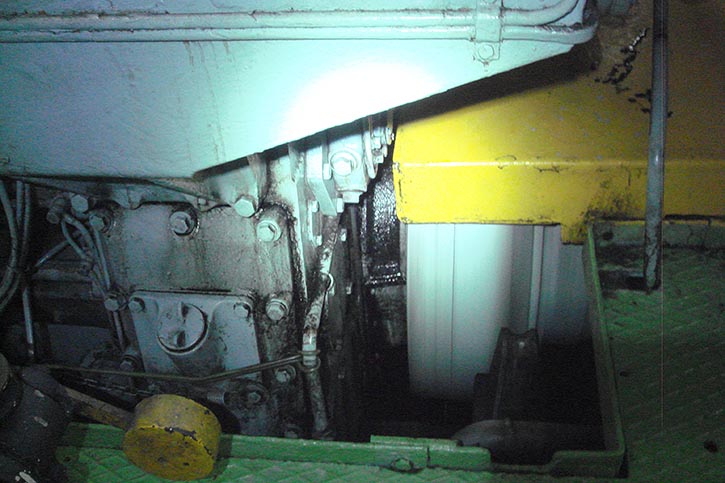 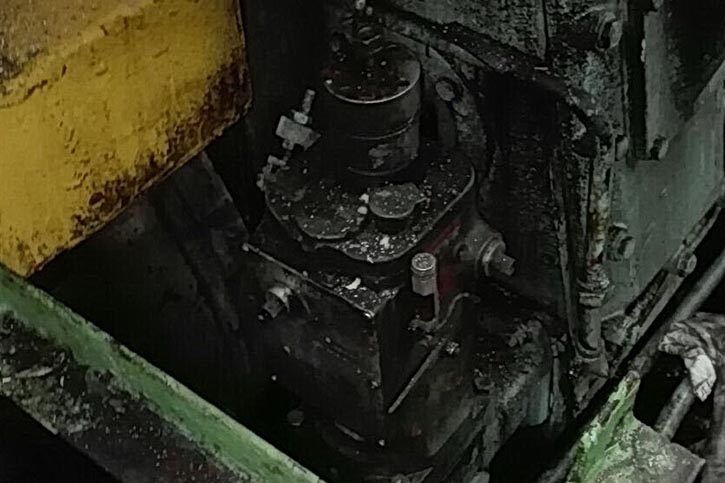 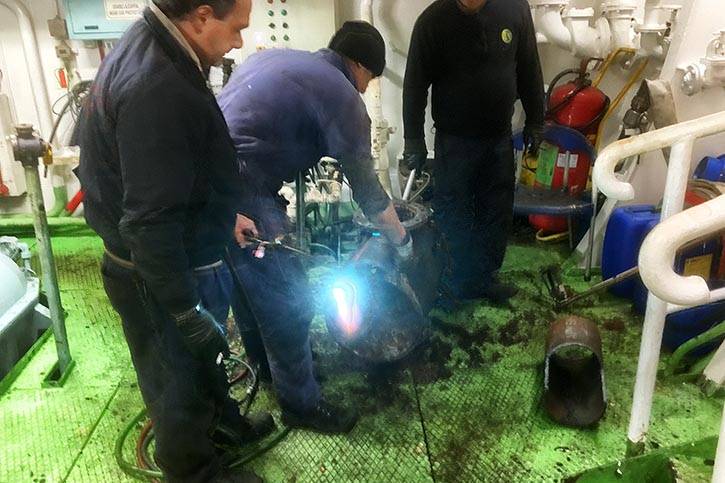 The before mentioned is what the recommendation say. But yet in practice things are different.

Recently I had to visit a RoPax ferry, which runs between the port of Naples (Italy) and the island of Capri for some engine testing, (Yes – you read right: it’s a ferry which carries human beings and also other goods).

The general condition of the engines and the engine rooms are, simply to say: bad! The bilge full of fuel and oil! Fuel and oil from leaking fuel and oil lines from the engines. For a certain reason the engine crew had to repair the seawater filter housing (was corroded). The repair was done by a torch. So far so good – or not? The attached pictures show that there is no one of the crew who features a fire extinguisher not to mention a fire extinguisher was nearby! On top of this: the crew smokes in this highly fire dangerous area – and no one cares!

Whether passengers guess what happens in the engine room – would they take such ferries? Not me!